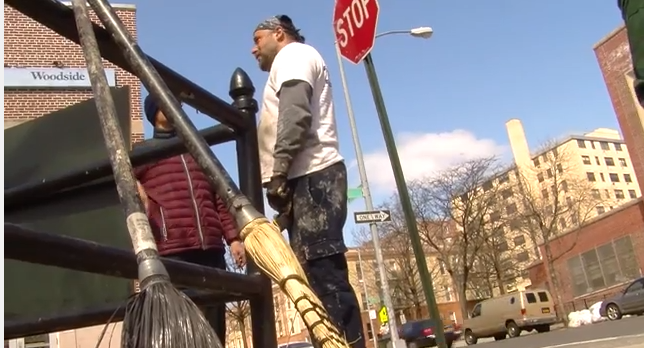 Every Saturday morning, David Rosasco and his team of volunteers take to the streets of Woodside, Queens to remove garbage and graffiti. Rosasco is one of the founding members of the Woodside Neighborhood association and he has made it his mission life to make Woodside one the cleanest neighborhoods around,  “We’re trying to show that in Woodside, a working class community has first class values and that our streets will be so clean that you’ll be able to eat warm ice cream from the sidewalks,” He said during one of his morning cleaning sessions.

In the neighboring area of Sunnyside, Queens some residents and business owners decided to establish a Business Improvement District (BID), which helps keep the streets clean. “Prior to the BID coming in, the streets in Sunnyside were lacking in cleanliness if you will, there was a lot of garbage and the Sanitation Department will only do what is in their budget,” Said Sunnyside Shines chairman, John Vogt. BIDs require that business owners in the designated area to pay a tax that goes towards improvements of the neighborhood, an unwelcome cost for some.